During the war years were established air defense committees across the country. Their purpose was to protect the citizens from possible air strikes. Reykjavik was divided into 60 district and district governors were appointed for each district. The choice of suitable locations were found for shelters and saw the district governors to their district would directives on air defense committee. In connection with these shelters were appointed bunker guards, couriers, also nursing units and the displacement forces and the scouts were part of preparedness as first aid. Also, each household had to get a place in the house that would qualify as shelters house was built so that it was possible.

In 1942 began to allocate fire appliances to Reykjavik. There were sand dunks, sand bags and shovels were useful in the attack by incendiary bombs. 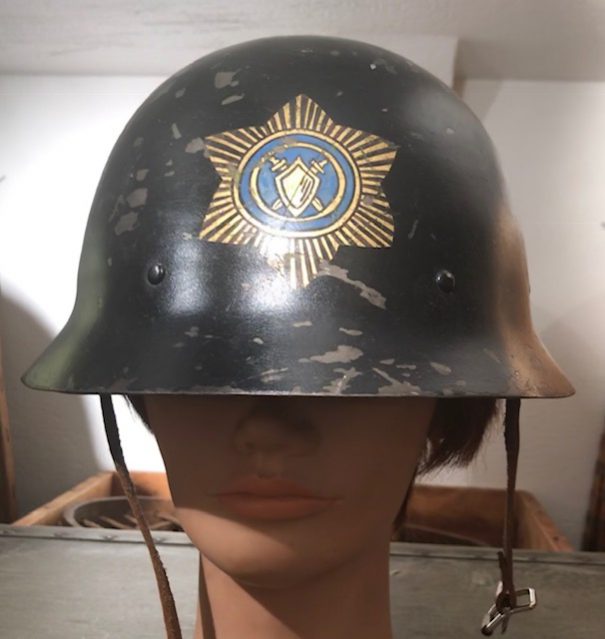 Reykjavík Police helmets, these  were prepared for riots in the war years. These helmets were a Swedish model M1926.

Helmet district manager, this is a British Mk. II number 2C but he has 3 holes in the sides indicating that it is for civilian use. 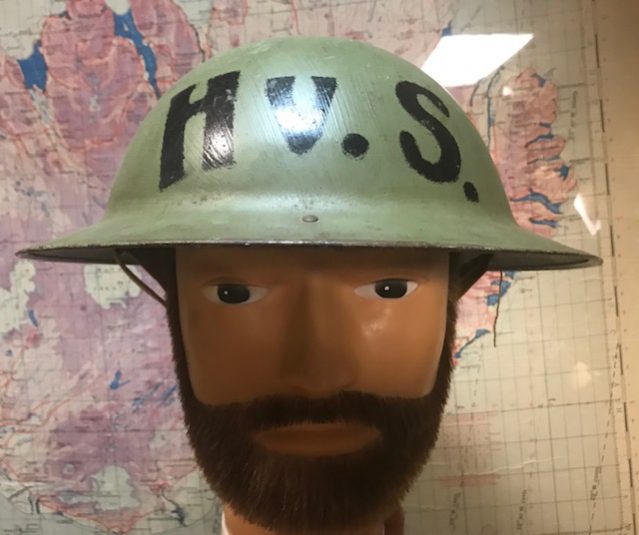 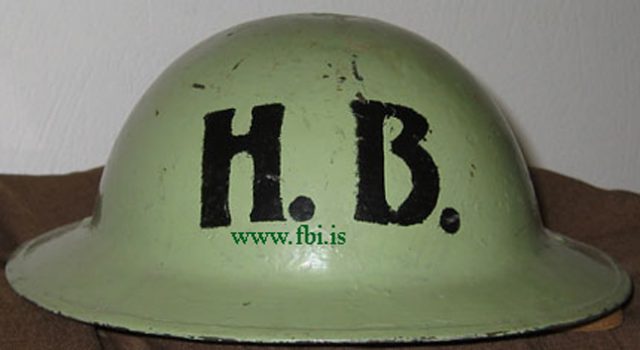 The helmet of courier, the helmet is m1917a1 is American. 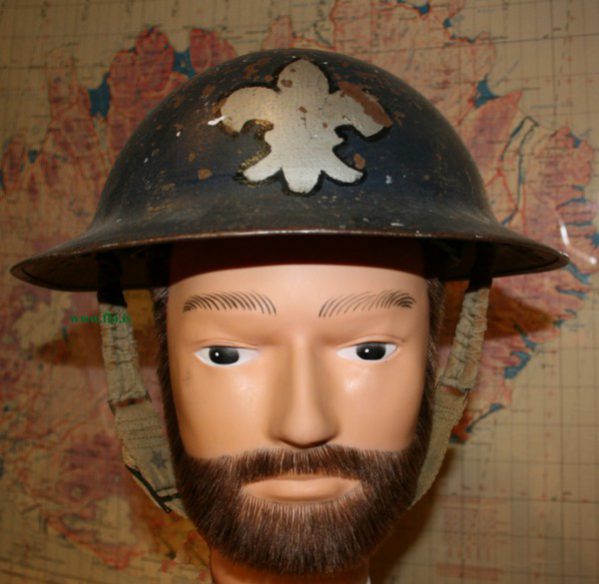 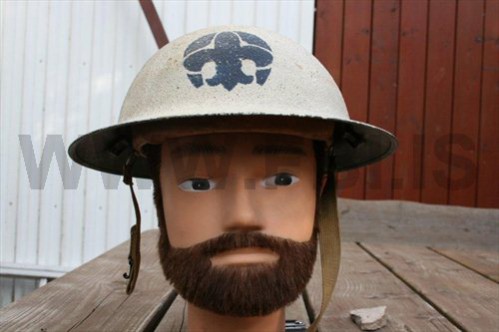 Another helmet from Scouts but the helmet is manufactured by m1917a1 McCord Radiator.

This armband is from scouts in Iceland 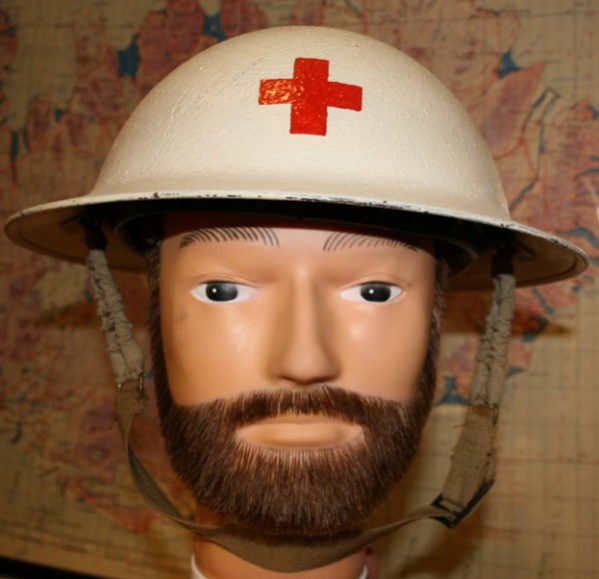 Helmet from a doctor in Reykjavik. 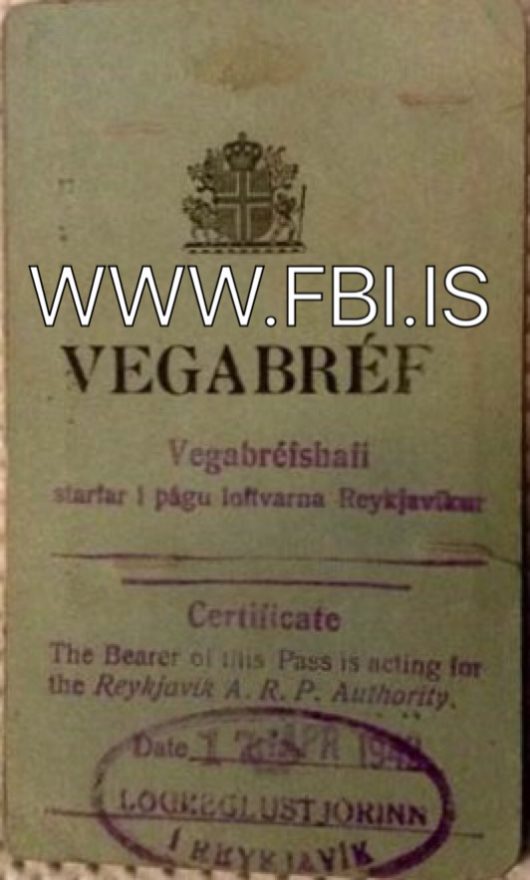 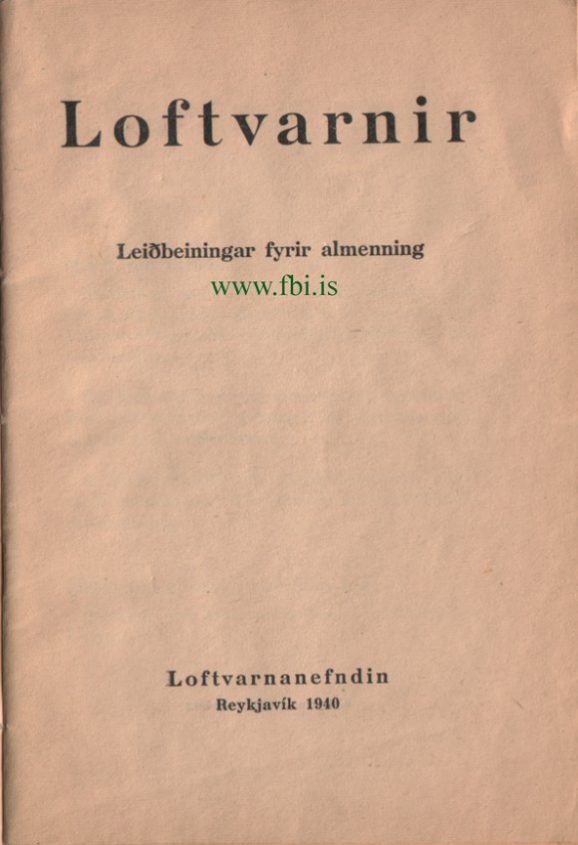 Here is a brochure in pdf document from the City Archives. 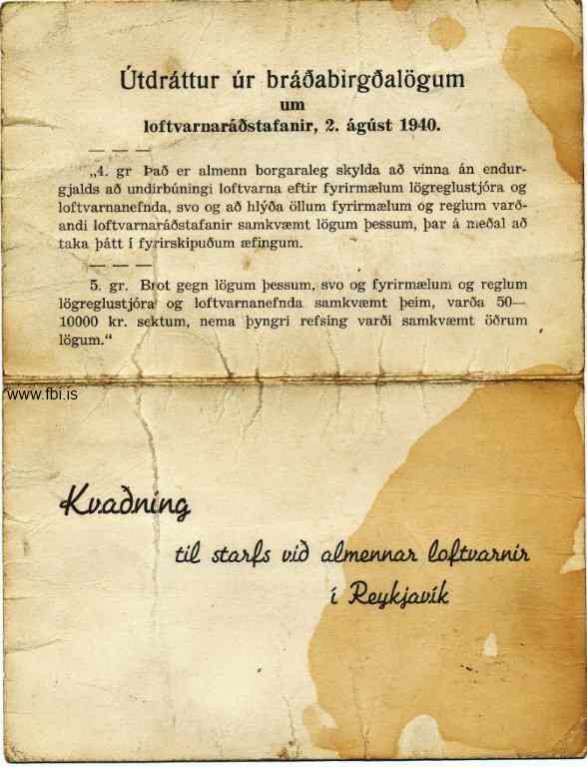 Query to work with the general air defense in Reykjavik. 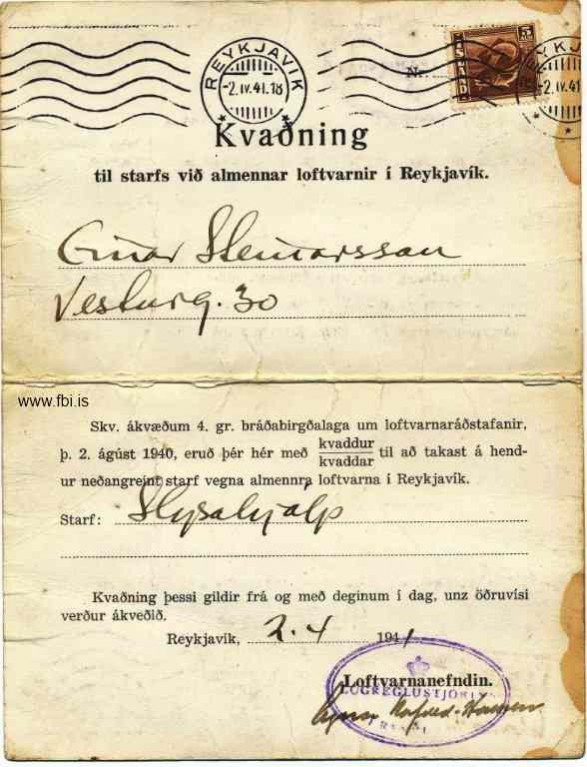 Photos of a summons from Einar Steinarsson to Aid in air defense committee. But Einar was in the Scouts in Reykjavik and he got a helmet with this job but is now unfortunately lost. This is by permission Steinar Einarsson, whose father got this summons. 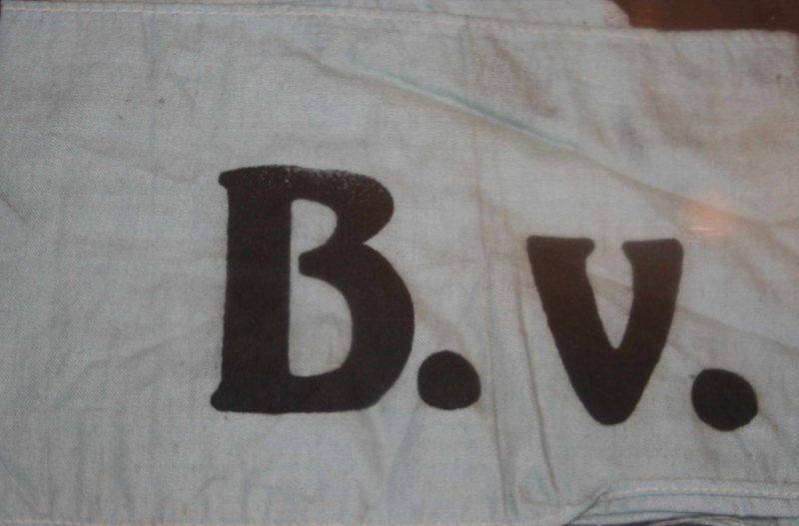 Armband air raid shelter, but there is the same used for stencil and helmets. This armband is on the Samansafninu in Kiðafelli. 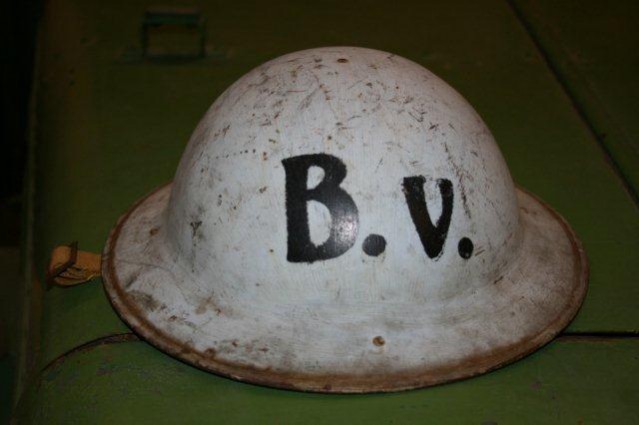 Here’s air raid shelter  helmet in the same color as armband. The picture taken on the transport museum Ystafelli. It seems that this helmet is American but not manufactured as a military helmet. 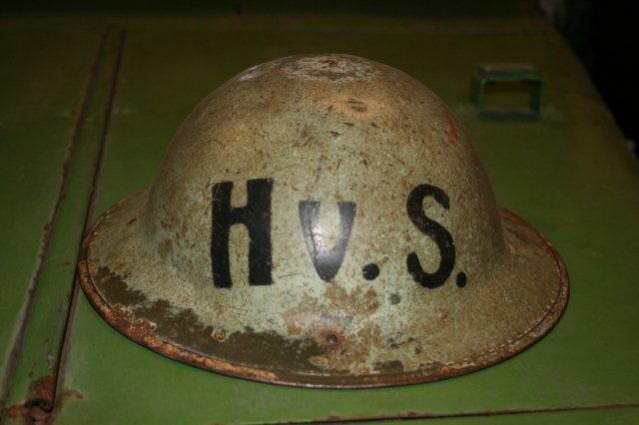 District manager, there is another color and another abbreviation of the helmet, but the most I’ve seen. This seems to me also to be an American helmet but not military helmet. The picture taken on the transport museum Ystafelli, great collection I encourage everyone to view. 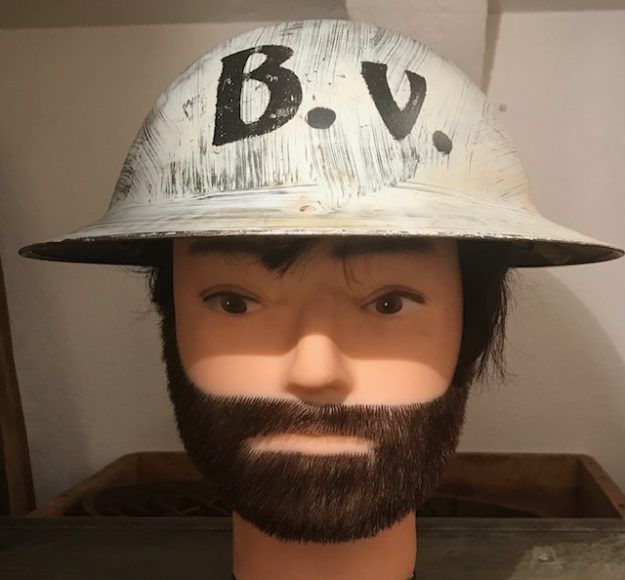 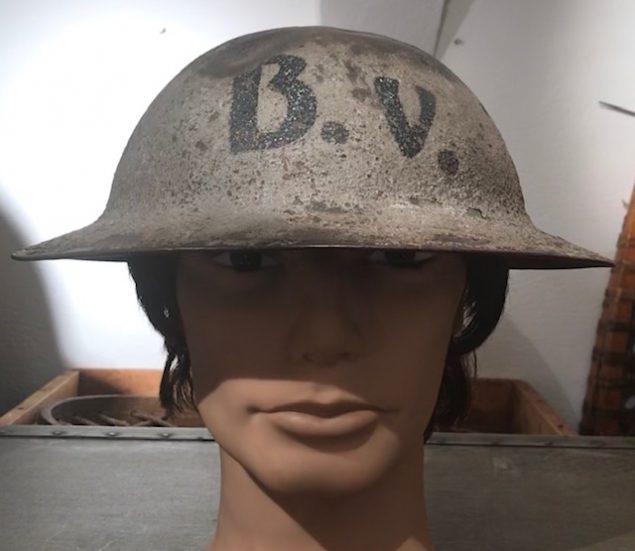 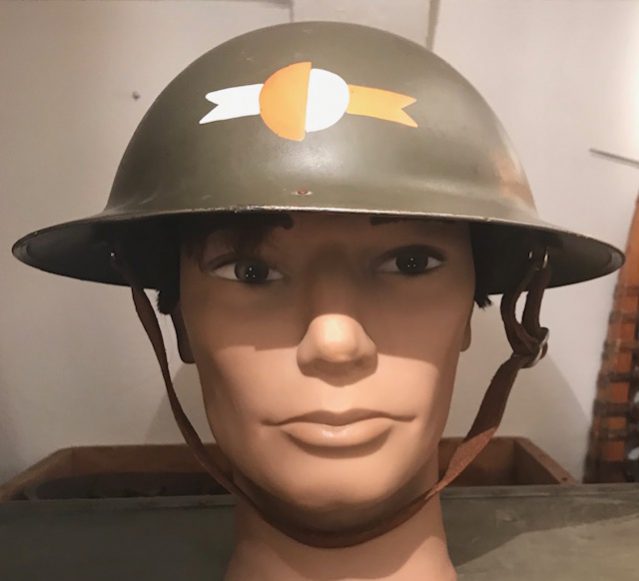 This type of helmet was imported for air defense committees and a new label that was supposed to refer to CD or Civil Defense, these helmets exist in blue and white label. 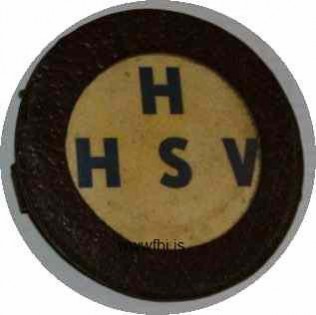 This is a sign from Reykjavík port, but they were aid teams that had the control of the port and extinguish fires in ships with air raid. 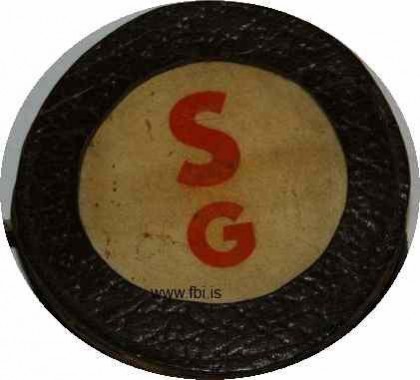 This armband could be from the fire brigade wear propane station employee was stationed at each fire station to turn off the gas if the air strikes come and fires burning. 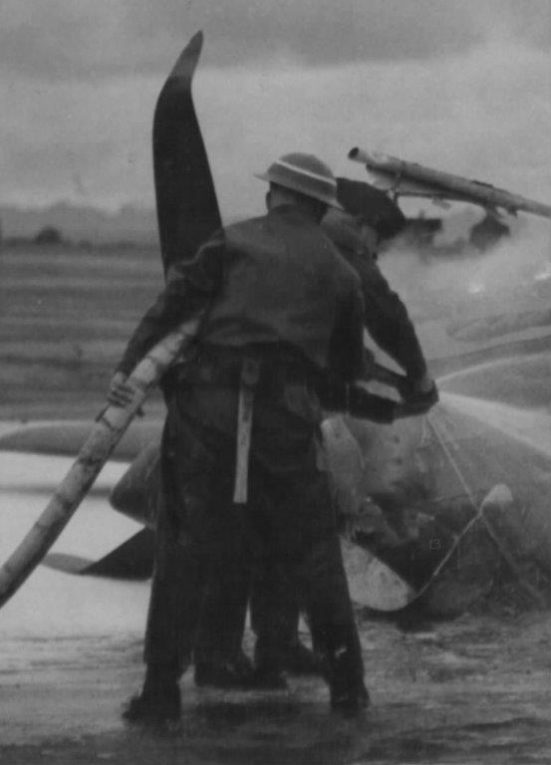 This photo is from the fire department at Reykjavík Airport but during the war years Reykjavík airport was a British military airport and under the control of R.A.F. 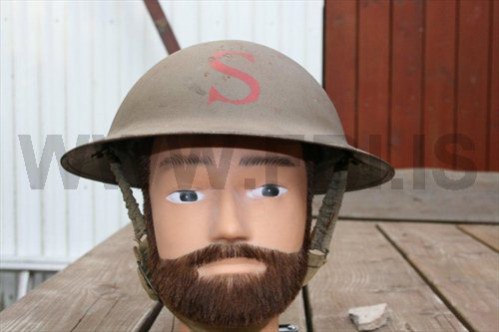 This helmet has a big S, maybe a fire brigade? If someone has a better experience, please contact tryggvi@fbi.is or 8225344.

Announcement
from air defense committee
Air Defence Committee Reykjavik has, because
after receiving the recommendation from the board of the British garrison team,
ákveðlð signs of impending air strike risk
be on the stand only
3 minutes.
Air Raid siren will then be silent until
a sign that the risk passed will be given.
Air Defence Committee. 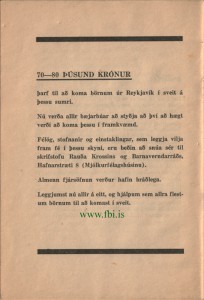